On the set… Acting

AND THE TOY FACTORY SHORT MOVIE

This short movie produced in Büyükada (Big Island) / Prinkipo which is one of the Princes’ Island in the Sea of Marmara, near Istanbul. Büyükada is a wonderful place for it’s specific position which is so close to Istanbul (it’s only 2300 metres from Maltepe coast to Büyükada )  but also far away from the city crowd and noise. This place is famous for its beaches with cool and clean water.

from my childhood memories

As on the other islands, motorized vehicles – except service vehicles –are forbidden. Visitors can explore the island by foot, bicycle, in phaeton (horse- drawn carriages) or by riding donkeys. The famous monastery Aya Yorgi (Hagia Yorgi) standing on the island’s highest point. There is a ritual to climb and you should strictly follow the old rules without talking, only praying. Orthodox believers climb barefoot. But it’s a holy place for people from all religions. Some muslim Turkish people mostly visit Aya Yorgi especially 2 times in a year April 23 and September 24. And with an old tradition, some people tie ropes or rag on to the bush and trees for their wishes come true.  And this short movie is inspired of this old tradition. 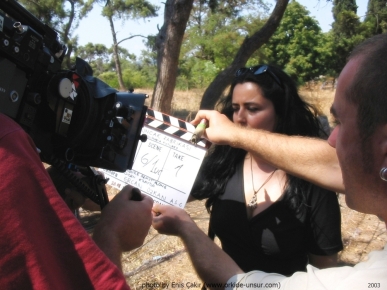 In my opinion, a drama director must have empathy actors/actresses’ world and have knowledge and/or instict about acting. I like acting and same improving my knowledge and understanding about this area. So it was a nice chance for me to have a role in this short movie, I found the opportunity with work wonderful actresses as Sevim Çalışgir, Tanju Tuncel (like we worked in Pamuk Prenses / Snow White short movie) Hasibe Eren. And even I kept my contact in my private life with Sevim Çalışgir since 1998 while we were working in TV drama Ateş Dansı/Fire Dance, it was the last time for me to had a chance working with her. Unfortunately this remarkable woman passed away in 2008.

In this short film set, I was also working as a Production Coordinator and collabrated with İsmet Karalar.  Due to motorized vehicles forbidden in island we had to take special permission for our movie set vehicles. And as a production coordinator I found the opportunity with work wonderful technical team too. Briefly, it was nice and enjoyable movie set in Büyükada with unforgettable memories…