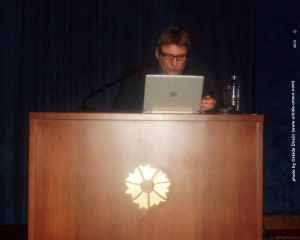 Last Friday I attended a special event organised by Pera Film in collaboration with the U.S. Consulate in Istanbul at the Pera Museum Auditorium.

Richard Peña  is a  Professor of Film Studies at Columbia University.  He has been the Program Director of the Film Society of Lincoln Center and the Director of the New York Film Festival since 1988.

In his talk, Mr.  Peña briefly informed us about the development of non-Hollywood filmmaking from the Twenties until today. We also watched short films and  film sequences (A  Bronx Morning directed by Jay Leyda/1931,  Meshes of the Afternoon directed by Maya Deren and Alexander Hammid/1943, In the Year of the Pig directed by Emile de Antonio/1968 and Killer of Sheep directed by Charles Burnett/1977 ).

Many thanks to Prof.  Peña  and  the organizators.