Seminar: The Cinema Law & the Copyright Law in Turkey 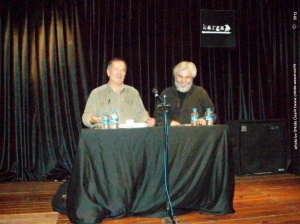 I attended a seminar about “the Cinema Law and the Copyright Law in Turkey” on Sunday, April 1, 2012 at KargArt, Kadıköy in Istanbul. The Speaker was Mr. Sabri Kuşkonmaz who is a lawyer, filmmaker, poet and writer. The Moderator was Mr. Metin Gönen who is a director, scriptwriter, producer and the founder of Paradoks Film Prodüksiyon.

Mr. Kuşkonmaz presented us important information about the subject as well as he gave us some enjoyable examples and case studies. The Q/A session was also very helpful for especially documentary and emerging feature length filmmakers.

He said after the revisions and changings during the past years (2001 and 2004), it seems there will be another revision about the Law On  Intellectual And Artistic Works (Law No: 5846)  regarding compatibility with EU Law in September 2012.

Many thanks to Mr. Kuşkonmaz and Mr. Gönen for devoting their time to create this event.