One of my favorite American independent  script writers and film directors Todd Solondz was in Istanbul for attending the 29th International Istanbul Film Festival (3-18 April, 2010) with his latest film “Life During Wartime” and his Masterclass. During the Masterclass, he has  impressed all the audiences not only with his sincere, interesting and humble  personality, but also with his intelligence and great sense of humor.  I would like to share my brief notes about his experiences, thoughts and knowledges which he shared with us during his class:

What Kind Of Artist Am I?

“I am not an artist who works in a studio system. I’ve been making my movies in a shaky position. My first experiences were about writing. I’ve been writing since i’ve learned reading & writing in primary school. When i studied at the college, I began to write plays but all of them were awful.

I am not a “Whiz Kid”, however i was envying to be considered as one of them while i was a kid. I was interested in music for a while in my childhood period. According to my mother, I could be a very good piano player if i would keep on going. Actually i have everything about  music except talent. I love photography very much. But i do not like to touch a camera. While i was a student they gave me a privilege and i didn’t have to shoot anyone’s movie as a cameraman. When it comes to technical subjects, i really do not understand all these terms such as “F Stop” etc. They are all confusing my mind.

How Am I Choosing My Story, How Am I Writing My Scripts?

This is a mysterious procedure. In fact it is an exploring, even self exploring procedure. I do not write summary or treatment. I sit on a silent quite place and just write. I do not know how i write. I take a pen and a  paper and start writing down, that’s it. Writing a script is not an intellectual process for me but a creative one. I’m trying to have an emphaty with all of my characters and treat them equally no matter what. Although making movies with my own stories is not profitable i do love doing that. Besides, this is the most secure way for me. When i go to a movie theater, i prefer watching my own movies than other directors.

My Relationship With Actors/Actresses

I treat the child actor/actress (except he/she is being explained about all necesarry details his/her parent who are at the set) as i treat adult ones. Children don’t like improvising, on the contrary they do memorize all their lines exactly in the script. Adult players mostly prefer improvising which i really do not prefer. You have to respect all your actors/actresses. If you do that, you take nice feedback and thereby you win. When you are working at the set you do what your players want to do. You try to understand their moods, up and downs even you may find yourself as their therapist.

I don’t do any rehearsal with my players before the shooting process. Because auditions are kind of rehearsal for me. Right after the auditions i get in touch with the actor/actress whom i’d like to work with.

Finding A Producer And Financial Source

Actually i do not making good money with my films so do my producer. I do not consider myself “successful” about money making. Although the word “Producer” is being used various meanings, in fact the producer is the person who finds money rather than the one who invest it. For instance, the producer of “Lawrence of Arabia” always has been proud of himself as not spending any cent of his films he produced. For example, as an independent film maker, you wanted to use your neighbour’s home as a plato for 2 months and he let you to do that. So you can write your neighbour’s name as a “Producer” in your movie. Sometimes an agent of an actor/actress can be a producer of your movie.

You don’t have to work with a big named producer. It is enough to find a person whose  target is walking with you in the same path you have chosen. You can name them either producers or partners, who must have the talents and qualifications which you don’t have. Personally i have pretty good experiences with my producers except one of them who was a real nightmare!

Being  A Director is Realizing That You Can Not Control Everything

When you are at the set, the script you have written gets a new identity which is completely different than before. When you are in editing procedure, you may watch, everything you considered genious are in the garbage, they are all being cut. At the end,  you have a movie which was not  planned like that. But if you are lucky enough, it might be much better than you planned.

If you want to make a movie, you have to have your own idea and unique style. Otherwise it would be meaningless and pointless to say “Hey, I wanna make a movie like Coen Brothers’ movies!”

When i studied at the film school, I have seen enough failures. Right after i’ve  made my first movie, things have settled down and i’ve decided to keep going. I have a weak personality.  If I have been told that I was very bad at making movie  with no talent I would quit. On the contrary, I have been told that i had a very good timing with lots of compliments.

I consider myself also as a director while i was writing. They are a married couple for me. I have to act as a producer as well. Because i have to think about the costs. If i had more money, my movies wouldn’t be better than they are. Think about “Blair Witch Project”. If they make the movie with bigger budget, it wouldn’t be better than it was. This movie is already good enough with its low budget. I advise young filmmakers to be clever and foxy. Sometimes you need to find simple but smart and practical solutions to make your dreams come true. Even world wide famous and succesful directors such as Werner Herzog and Wim Wenders were working with their friends within minumum locations at the beginning of their careers. The main point you have to think about is “What is the unique thing i will tell?” I don’t mention about giving messages, what i mention is the essential thing is your experience, the thing you share.

The main reason that i wanted to be a film director is i do not want someone elses make  movies with my stories. Actually I have nothing to considered as a director. A film set is a nightmare for me. May be it is not same for other directors, everybody has their own approach. For instance if you ask to Ang Lee, he would probably say he feels himself “alive” when he is at the set. The situation is vica versa for me though. 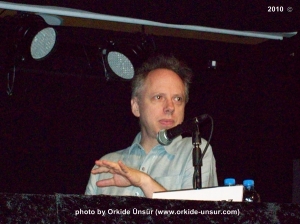 Directing a movie is a very weird situation. One day they say to you “You are satan who comes from the hell! ” and the other day they say vica versa. That’s why you have to pay attention to both reactions. It’s dangerous if you beleive when somebody call you “Oh! You are a genious!” Right after you finished your first movie you might  think to yourself  “Yeah…I’m done. I’m  a brilliant director”. In fact that would be a big delusion. If you are a film maker, you have many reasons to struggle. It’s a fact you need some ego if you wanna be a director.”